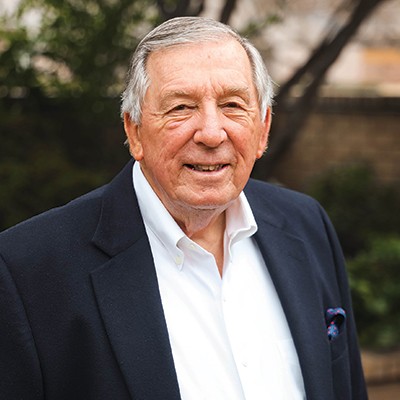 Denny is a South Bend, Indiana native who moved to Texas for an education and found his wife Ann. He was an Indiana high school basketball undefeated player at South Bend Central and became a starting guard on the 1957 undefeated Central team that won the Indiana High School Championship. Denny played at the University of Houston (1958-1962) and officiated basketball at the national collegiate level for 20 years, officiating the NCAA tournament 7 years.

Denny married Ann in 1960, and they moved to Wichita Falls in 1962. They have 2 children, Debbie Gustafson and Den Bishop, along with 4 grandchildren (including Ashton Gustafson) and 4 great-grandchildren. He has been a licensed Texas Realtor since 1963 and became a full-time Realtor, joining Ann in business, in 1986.

Their achievements together are numerous: Star Power Stars, Texoma’s Best Realtor or Company ten times, speakers for CRS and Star Power Conventions, and more. Denny was inducted into the Indiana Basketball Hall of Fame in 2009. His most recent passion is his gardening at their “country house” at Charlie, Texas